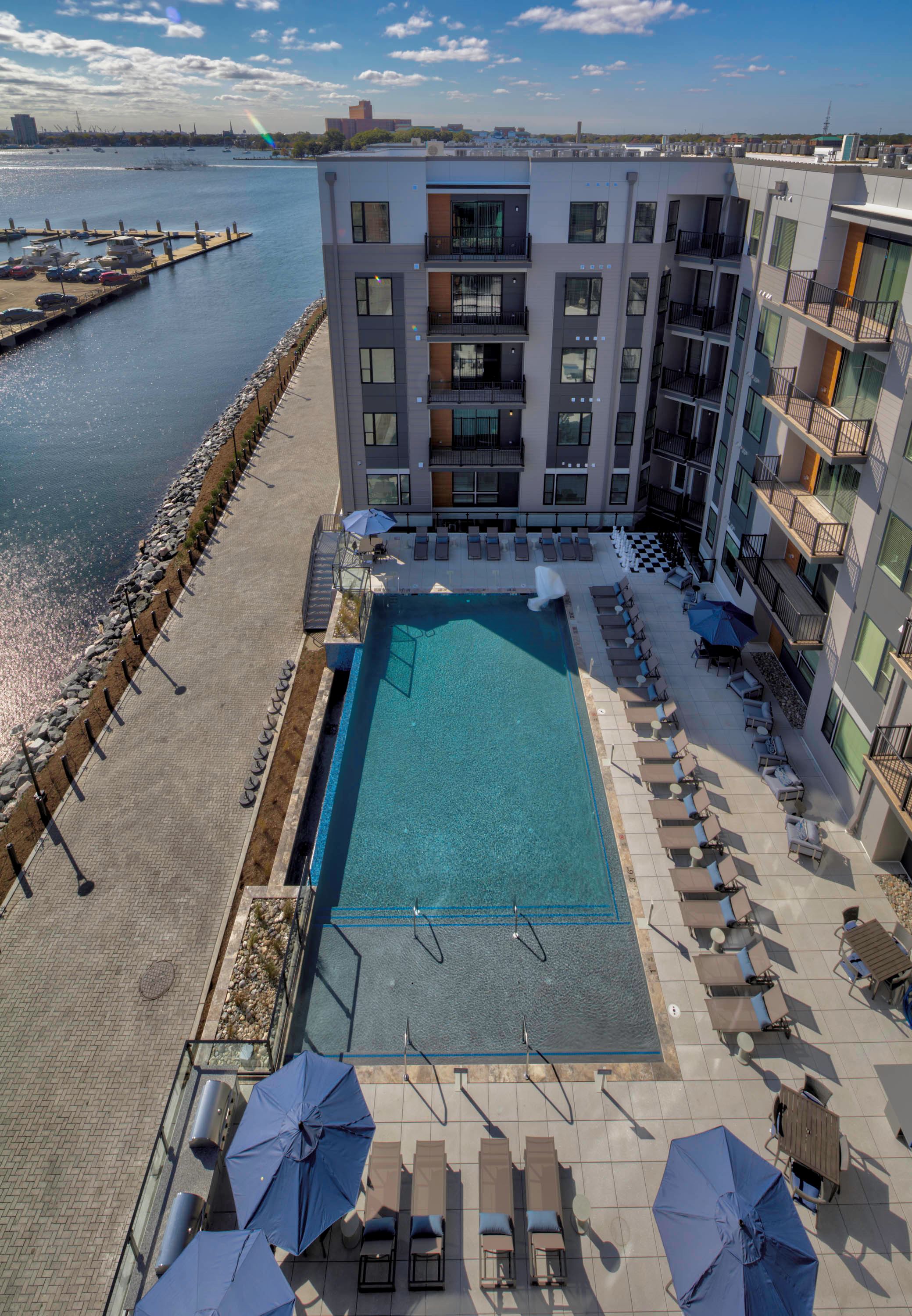 The Breeden Company, the nationally recognized Virginia Beach-based real estate development firm, announced the grand opening of their newest luxury multifamily asset, The Lofts at Front Street, in Norfolk, Virginia. The new community is set on the banks of the Elizabeth River/Intracoastal Waterway.

City leaders and public figures joined The Breeden Company on October 27, 2022 in celebrating the mid-rise community. Designed by Cox, Kliewer & Company, PC, The Lofts at Front Street sits on 4.5 acres and features 258 units, all with a river or Hague water view, a riverfront observation deck, a kayak launch, upscale fitness center and riverside infinity pool. Apartment Interiors feature a variety of luxe features including granite countertops, stainless steel appliances, upscale vinyl wood plank flooring and plush carpeting and dark cabinetry with contemporary gold hardware. The Lofts at Front Street is also conveniently located in the Fort Norfolk corridor of Downtown Norfolk, Virginia, making it an ideal location for those looking for employment in the medical and biotech market that include employers such as EVMS, Children’s Hospital of the King’s Daughter and Sentara. The community also achieved National Green Building Standard (NGBS) Bronze Compliance for energy efficiency. Breeden Construction served as general contractor on the project. Breeden Property Management is the managing operator of the community.

“The Lofts at Front Street has been a collaborative effort between Breeden and the City of Norfolk. This particular development abides by Norfolk’s 2030 plan in that the community is a part of the city’s Elizabeth River Trail, further allowing greater multimodal transportation avenues. We also designed the project to combat sea level rise, which is a large concern for all in Norfolk as well as surrounding waterfront cities,” said Tim Faulkner, President and Chief Executive Officer of The Breeden Company.

Along with The Lofts at Front Street, The Breeden Company is developing several other multifamily projects in the Hampton Roads market including The Pinnacle on 31st Street in Virginia Beach, Virginia; Huntington Pointe in Newport News, Virginia and Lake Taylor Pointe in Norfolk, Virginia.

Posted in: Residential, Company, Announcements
About The Breeden Company

The Breeden Company, the nationally recognized Virginia Beach-based real estate development firm, is proud to announce that its multifamily division won several industry awards, showcasing 5 new wins in categories such as Community Manager of the Year, Community of the Year and Best Amenity Package.
Read More
7239

Amidst Multifamily Division’s Substantial Growth, a New Regional Director is Added to the Virginia Portfolio

The Breeden Company, the nationally recognized Virginia Beach-based real estate development firm, today announced the promotion of Debbie Holsomback to Regional Manager in the multifamily division. Debbie is a 17-year Breeden team member, most recently managing a luxury multifamily asset in the Richmond, Virginia market. She also served as a mentor in the company’s training group, being responsible for the promotion of, on average, 10 team members each year in the Richmond submarket.
Read More
Employee Portal Login